Honglan Huang is a second-year PhD student in Comparative Literature at Yale University. Her major research interest is in the material and theatrical aspects of picture books. Other interests include narratology, book history, Asian languages and literature, Classical literature, and translation.

Mary Serjant (1674-1712), the signed author of this copy book (Beinecke Osborn fb 98), was the second daughter of Cornelius and Rebecca Serjant. She was married to Benjamine Morss, a hosier, in 1692 (Mortimer 1977, 52), four years after the date signed in this copy book. Her sister Elizabeth, who was three years elder, was married to Caleb Lloyd, a grocer, one year earlier (Mortimer 1977, 50). Their father Cornelius Serjant was a soap maker and an “active Quaker from 1670s to death 1726” (Barry 1994, 61). Mary Serjant seemed to be very much influenced by her father’s affiliation to the Quaker community as she is reported to be “active in the Women’s meeting” in 1705 (Mortimer 1977, 253).

Mary Serjant is not the only “scholler” to Elizabeth Beane, her “Mistress in the art of writing and arithmetick” as indicated in the title page. 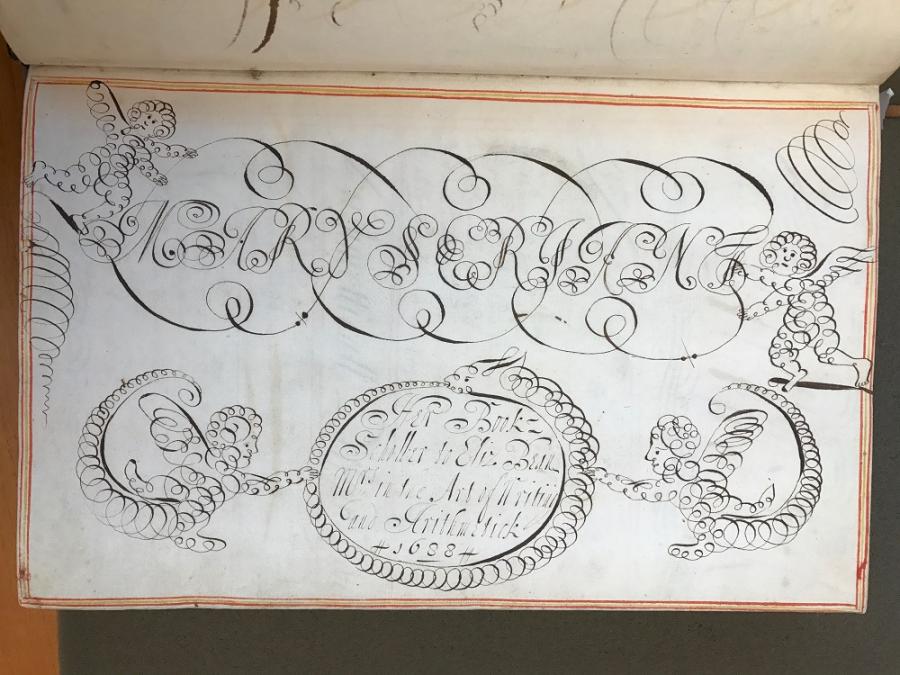 Sarah Cole, another girl tutored by this woman, similarly named Beane as her “Mistress in the art of writing” in a copy book made three years earlier (Folger MS V.b. 292). Both copy books begin with a front piece drawing before the title page: while the title pages of the two books are strikingly similar in the choice of ornamental fonts and the placement of figures, the front piece drawings diverge completely from each other. Cole chooses the image of a sailing ship, a subject that Edward Cocker has treated in his The Pens Transcendencie, but with more spontaneity and energy. The combat scene between a knight and a bear that Serjant chooses for hers has a less explicit reference to a previous treatment, but the sword and the shield do appear in the costume of a warrior on Edward Cocker’s title page to The Guide to Pen-man-ship. In Serjant’s version, two large squiggles lay the ground for the duel, while others towards the top give us a hint of the sky and the clouds, and their similarity with the upper-part of Cole’s composition shows that these lines might be the fixed part of the template. 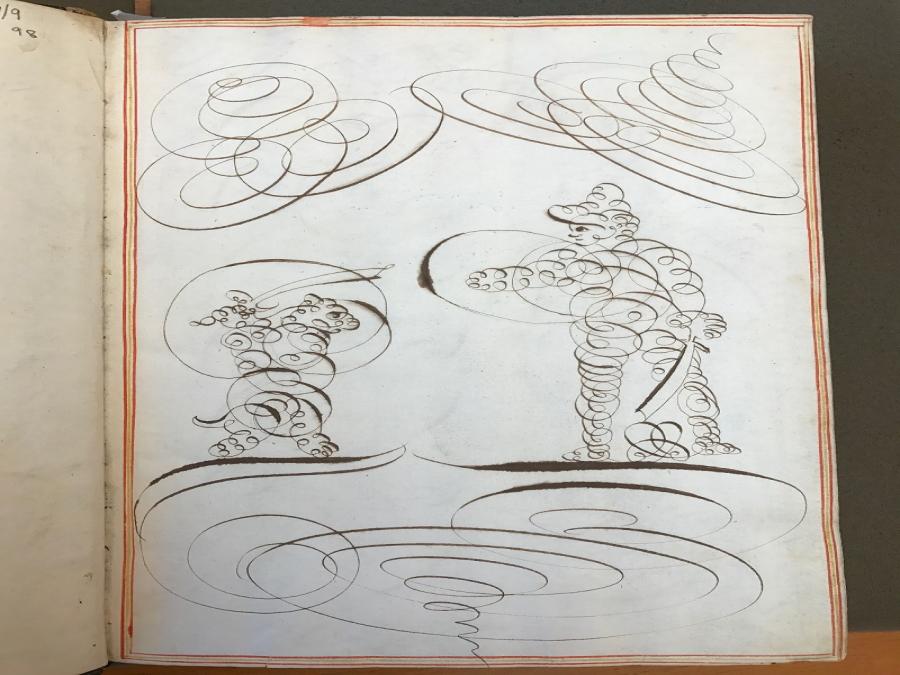 Squiggles, flourishes, knots and other decorative elements in writing manuals have been considered more as occasions for writing masters’ self-promotion than serving any practical purpose, since the hands and flourishes “characterized by some artificial quality” are only rarely used “in manuscripts in which an ornate script is suitable” (Schulz 1942, 418). Without any hint on the order of the strokes or the speed of the hand, these labyrinthine surfaces of the writing manuals dramatize “the challenges inherent in learning to write from intricate, accomplished samples” (Thadani 2013, 424). Serjant’s copy thus presents an interesting case in which the flourishes are not thrown away for its lack of practical function but are retained and even strongly embraced throughout the space of the 169 folios. Although it is often assumed that Cocker’s flourishes “were just too late to catch the market,” the almost exact copies of Cocker’s knot drawings reproduced by Serjant with the help of her Mistress suggests that Cocker’s writing manuals may have been primarily read for its dazzling flourishes than anything else (Morison 1962, xxxiv). 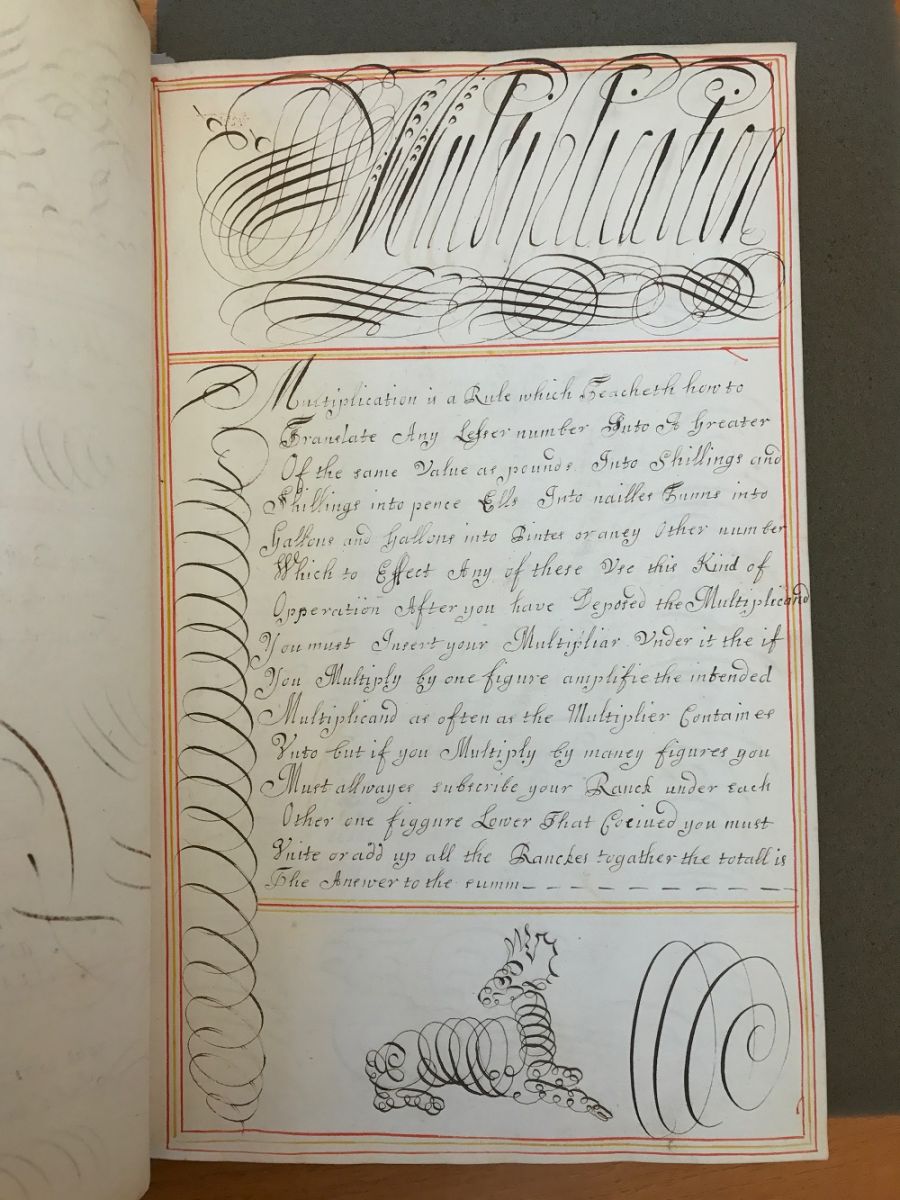 The drawing of a deer that appears on folio 22 of Serjant’s book is almost the same as that in Cocker’s The Guide to Pen-man-ship. The sequence and the direction of the swirls in Serjant’s copy agree with that of the original, with a slight variation in the form of the tail and the antlers. 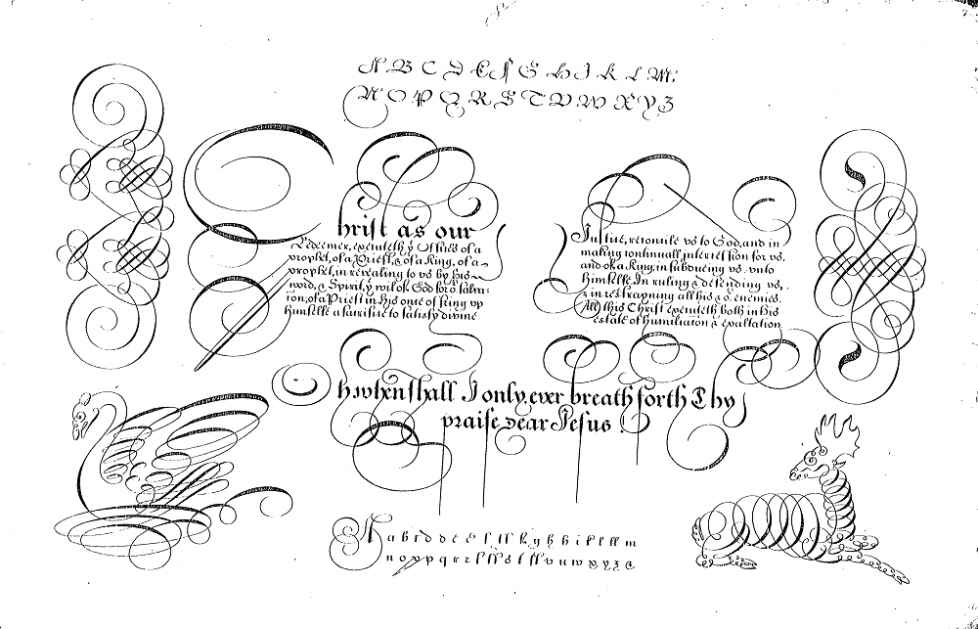 The figure of the writing pen that appears at the bottom of folio 59 in Serjant’s book too is the exact replica of what hovers above letterforms in a page from Edward Cocker’s The Guide to Pen-manship, which Sarah Cole also copies onto the “final page of the exercise book to contain actual computations” (Smith 2005). 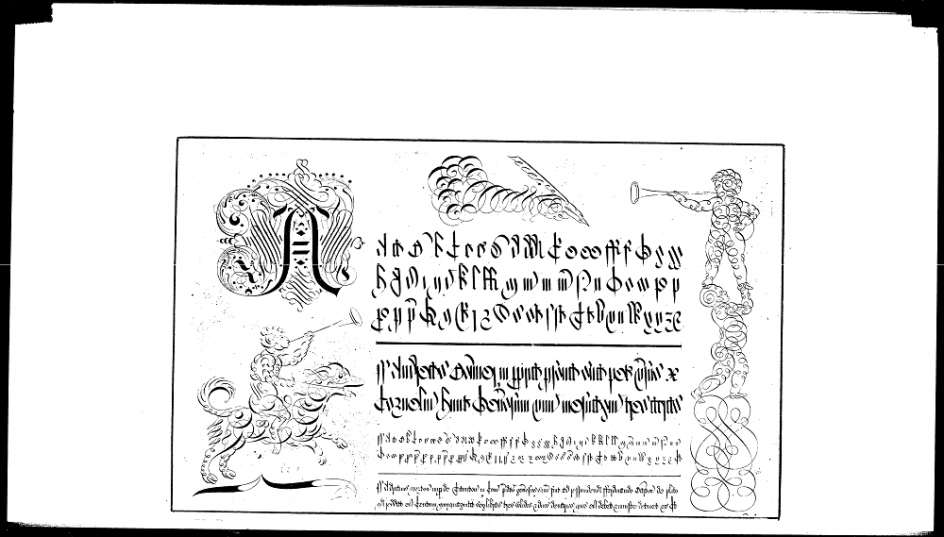 In Cole’s and Serjant’s copies, however, there is no stylistic difference between the drawing hand and what seems to be drawn by the hand. Although the hand is moved from the center to the right in Cole’s version, surrounding both Cole’s and Serjant’s hand figures are “loops…contiguously extending from [one] box into [another]” which seem to be the work of this “ficticious arm” (Smith 2005). By conflating the creator with the created onto the same page in an Escherian way, the instability of the surface is in full effect: the figure of the writing hand constantly oscillates between an artifact created by an artist from the outside of the page and a fictive character that seems to have enough agency of its own to draw other parts of the page into existence. This oscillation is even dramatized in Serjant’s copy by some lingering traces of a lead underdrawing, and small added-on strokes that seek to mend the angle of the curves (fig. 3.4). While the loops spun out of the quill is the same looping structure that comprises the arm of the writing hand, the careful manipulation of the curves of the loops through retouching in the hand figure stands in contrast with the almost instinctual sweep in the surrounding loops. It is therefore possible that Serjant draws the hand figure first, and the surrounding loops are the result of her further practice on the shape that she still has not fully grasped after a first attempt in black lead and a second attempt in ink.

Unlike Cocker who takes pain to devise this embroidery-like figure but refuses to integrate it into the visual texture of the page, both Cole and Serjant make effort to anchor this borrowed design into the local space of the page, giving it the spot in the limelight and contextualizing the subject of the drawing within their very own moments of creation, a strategy perhaps tacitly encouraged by the template. Copying is therefore not simply a displacement, but a process of translation through which the thing copied lands at its destination, destined to take roots and flourish. 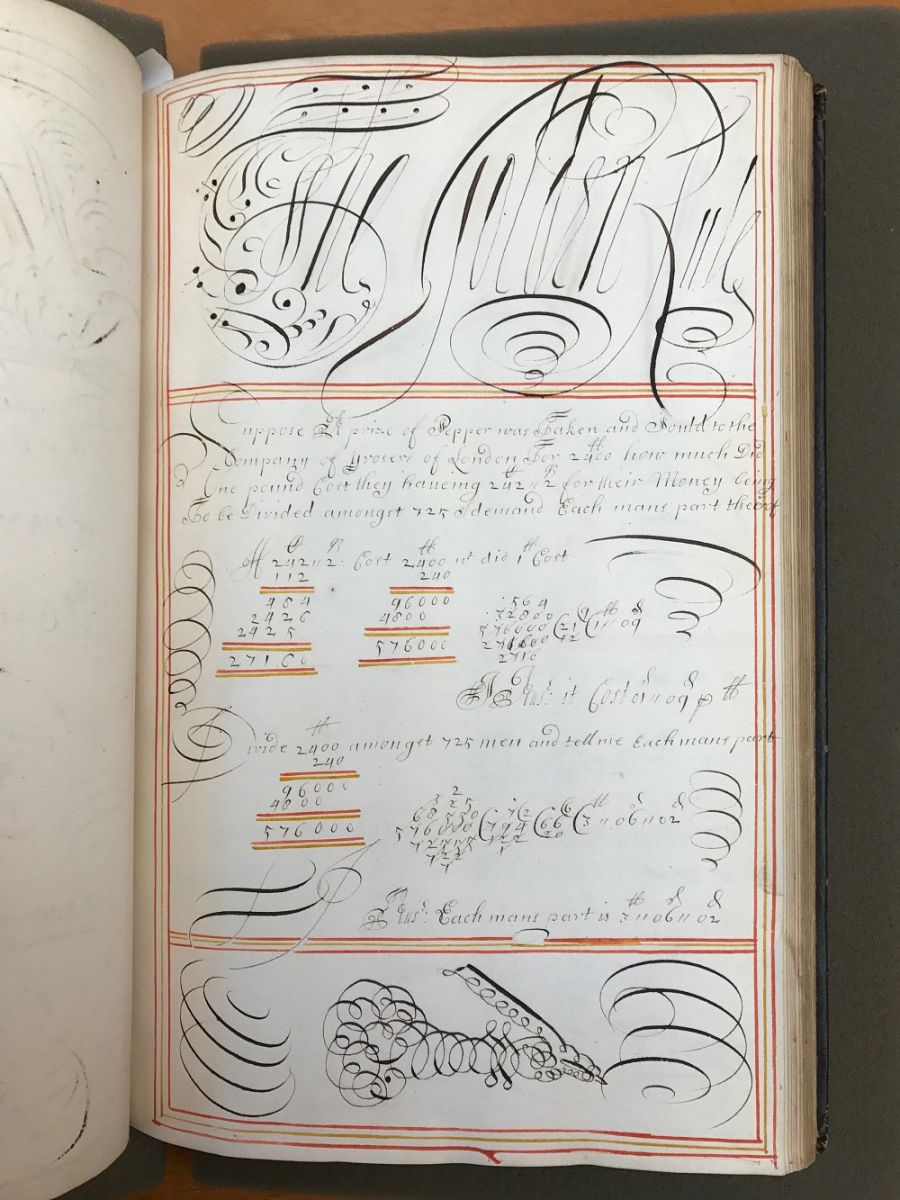 Morison, Stanley. 1962. “The Development of Hand-Writing: An Outline.” In The English Writing-Masters and their Copy-books: 1570-1800, edited by Ambrose Heal. xxiii-xl. Hildesheim, Germany: Georg Olms Verlagsbuchhandlung.

Mortimer, Russell. 1971. Minute Book of the Men’s Meeting of the Society of Friends in Bristol, 1667-1686. Bristol: Printed for the Bristol record Society.