Kyle Conrau-Lewis is a PhD candidate in the Classics department. His dissertation is titled ‘The Ferment of Knowledge: Classical Historiographical Miscellanies’ and examines how compilations of Greco-Roman histories circulated in the ancient world and were transmitted in manuscript. He is interested more broadly in pre-modern text-culture and ideas of excerption, miscellany and paratext.

What is an index? The “index” is in some ways a misleading word for medieval manuscripts. With a modern book, the reader consults the index, looks up a key term and then locates the relevant pages or chapters in the main text, but this is not necessarily a good model for medieval reading. When scribes labelled the “indices” in their manuscripts, they usually described them more broadly as tabulae (sometimes also repertoria or inventaria, ‘aids for finding’), terms which also encompassed various other textual apparatus from tables of contents to lexica and glossaries to concordances and synopses. By using the term “index,” do bibliographers risk anachronism, imposing modern expectations of the back-of-the-book index on a premodern book?

How Were Medieval Indices Made?

The Beinecke collection provides a number of examples of how scribes created their indices. For one, the scribe may simply tabulate the titles and marginal notes in the main text (as for example Beinecke MS 224, where most of the entries match the annotations in the margins). Similarly, in the case of Marston MS 154, a subsequent Spanish reader has gone through the manuscript, placing alphabetical letters in the margins and picking out topics to be placed in the index. 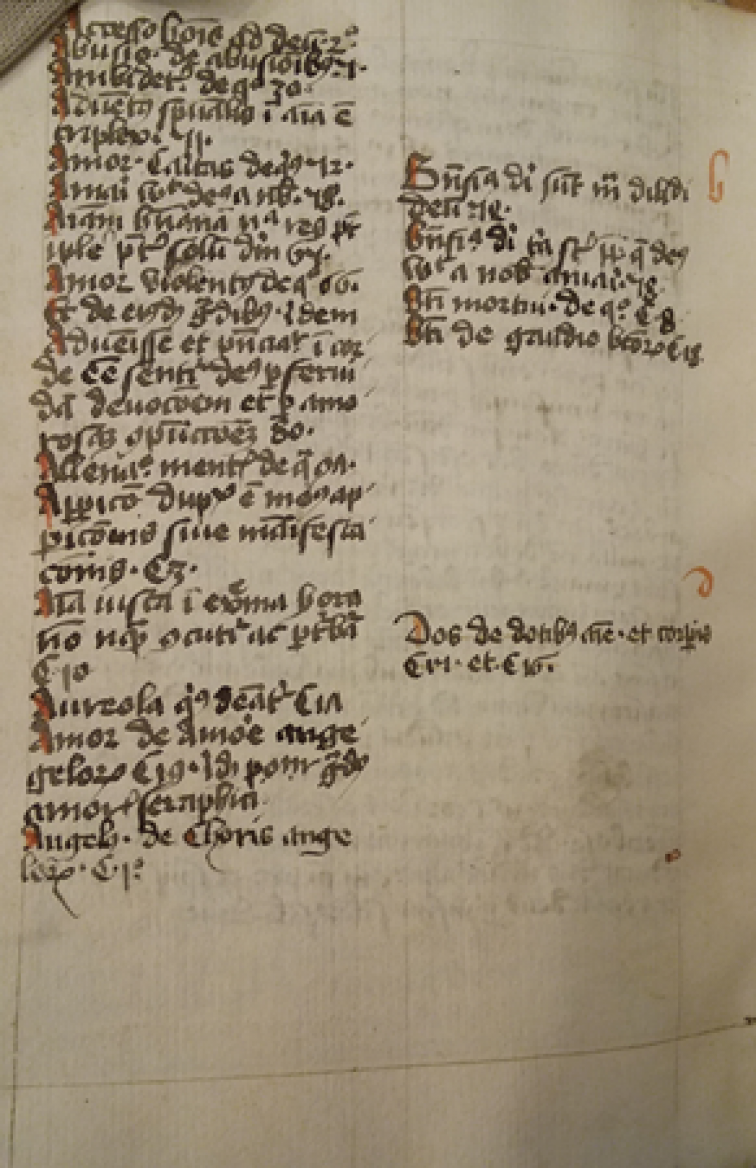 Figure 1: Beinecke MS 224 (XV, Germany), f.182v. The scribe here has left space for each letter and then added chapter titles and rubrics afterwards. 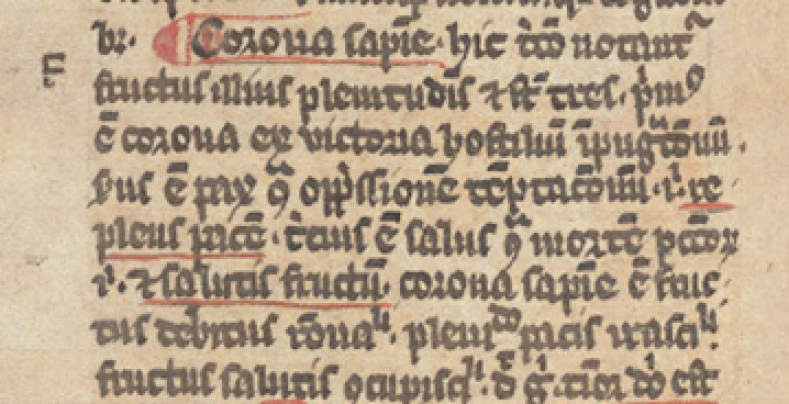 Figure 2: Marston MS 154 (Paris, XIV; index made later in Spain), f.7v “F for Fructus (fruit)”. The indexer here notes the letter F beside an explanation of how the crown of wisdom is the fruit of fulness.

Other scribes likely used an intermediary notebook, making marginal annotations in their manuscripts and compiling these into a notebook and then copying out a final index. A particularly fascinating example is Beinecke MS 766, where the scribe John of Carnago has copied out various epistles of St Jerome, leaving a colophon dating its completion to August 1439 and a second colophon at the end of the index dating it to November 1440.

Why did it take over a year to copy this index? In part, the colophon for the index explains that the scribe had been ill: ‘here ends the table made by John of Carnago during his illness’. But it nonetheless shows that indexers needed time after the completion of their work to read through the annotations and copy them out. Likely John of Carnago read through his manuscript, noting down the marginal titles which he then tabulated in his index. Not all the entries in the index can be found in the margins, suggesting he did not compile his index directly from the margins and sometimes there are slight differences (Amoris mulieris descriptio ‘description of the love of a woman’ in the margin ~ Amor mulieris est insatiabilis ‘the love of a woman is insatiable’ in the index). The index therefore loosely corresponds to the marginal titles but John of Carnago probably added more to a working note-book while expanding the titles into a more sentential format over the course of 15 months.

However, while John of Carnago created his index by reading the content of the manuscript – creating marginal titles and building an index from it – many scribes presumably derived their topics from other indices or alphabetical works. A scribe would consult an index of a work of a relevant genre and then apply that to their manuscript. Sermonaries and biblical commentaries for example often have indices with topics like: abicere ‘to cast away’; abstinencia ‘abstinence’; ambulare ‘to walk’; abissus ‘abyss’… ypocrisis ‘hypocrisy’; ‘zelum ‘zeal’ (compare Beinecke MS 1203, ff.2r-4v; Marston MS 154, ff.1r-9v; Marston MS 233, ff.76r-77v). Such kinds of topical indices could also be applied to texts perceived to be of a similar purpose. For example, two manuscripts in the Beinecke contain an index with similar topics for the classical author, Valerius Maximus (Beinecke MS 762 and Marston 37). Valerius Maximus’ collection of pagan histories in fact was commonly used in sermons, and so it is not surprising that the indices to this text match those of sermonaries. Indexers drew on a conventional set of topics from other indices which they applied to cognate genres.

Collections of indices particularly in 15th humanist Italy often circulated together, independent of the main text that they referenced.[i] This suggests that indices could be read and used on their own. The Beinecke does not have any examples of such index collections, but it does have a few instances of indices bound separately from the texts that they referenced. For example, Marston MS 285 is a collection of various theological treatises copied in Italy in the 15th century. Parts 1-4 contain various praises of Mary and John the Evangelist, a defense of Thomas Aquinas and a treatise by Augustine on divination. Finally, Part 5 is an index to an unidentified work consisting of various theological topics. Such an index could not really be used on its own – for example, one entry reads ‘friendship is quadruplex’ (amicitia quadruplex). The reader would need the main text to know how friendship is quadruplex, yet at some point a reader still believed the index would be usefully preserved separate from the main text. 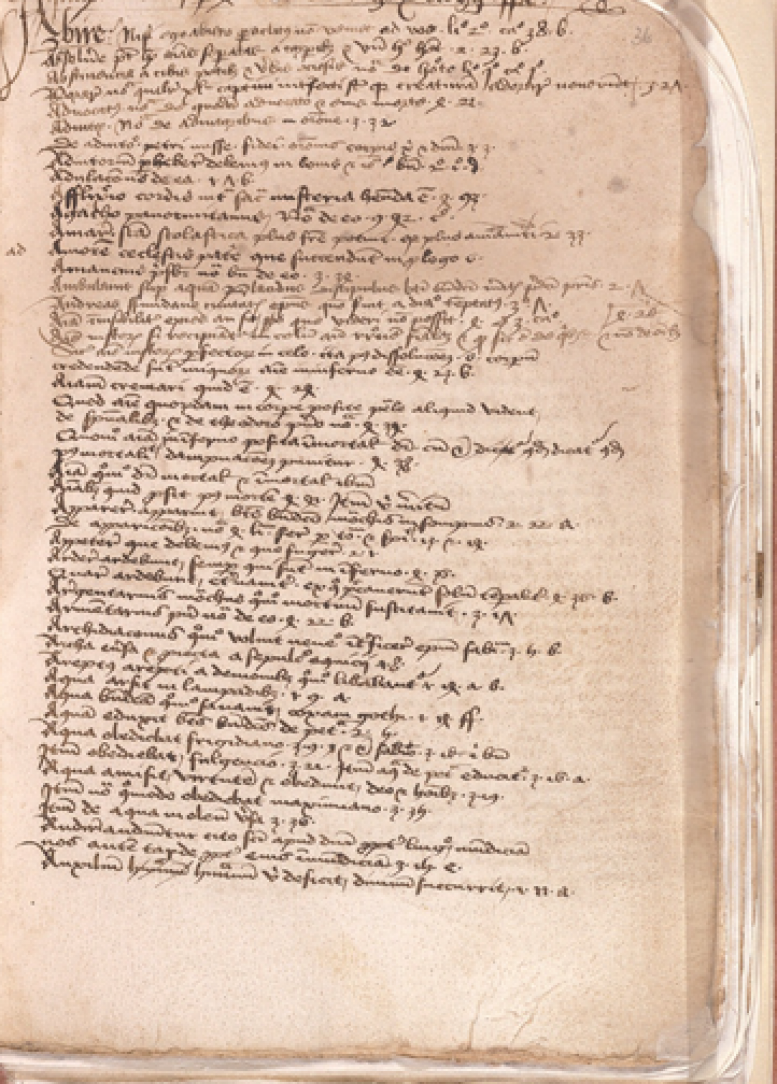 Figure 5: Beinecke MS 317 (England, XV), f.36r. The scribe here has copied an index to the dialogues of Gregory the Great alongside various hagiographic, devotional, and penitential materials.

An index might serve as a useful work in its own right. Beinecke MS 317 is a 15th century English devotional miscellany, containing a seemingly random index to the dialogues of Pope Gregory the Great. The miscellany was produced by a single scribe, and in addition to this index, the scribe has also copied a list of the virtues of the Mass, a life of St Jerome, and various penitential treatises. However, while the index may appear an unlikely candidate for a devotional book, the index is in many ways a useful collection of moral and spiritual exhortations alongside inspiring examples of miracles by prayer and fits very well with the program of the book.

The index provides inspiring miracles—‘A student of saint Benedict walked on water calmly’ (Ambulauit super aquam placidus discipulus beati benedicti)—as well as moral exhortations such as ‘The world should not be loved but despised’ (Mundus non est amandus sed despieciendus). Beinecke MS 317 is full of fascinating theological claims: ‘A man can absolve souls separated from bodies’ (Absoluere potest homo animas separatas a corporibus) and ‘The saints are heard in the presence of god because of the purity of their tongue, but we are heard slowly because of impurity’ (audiuntur cito sancti apud deum propter lingue mundiciam nos autem tarde propter eius inmundiciam). We find such admonitory entries as ‘A deacon was beheaded and note his disobedience’ (Decollatus est diaconus et nota de inobediencia). Yet it is also full of curious ethnographic facts too: ‘A Gallic woman was not afraid to have a beard’ (barbam habere non timuit galla). It records wonderous encounters with dragons: ‘How a dragon wanted to devour a monk who wanted to remain that region’ (Draco quomodo uoluit deuorare monachum qui in regione uoluit permanere) and conversely ‘Saint Sanctiolus rescued a dragon from death’ (sanctus sanctiolus liberauit draconem a morte). The index by itself is edifying, paradoxographical, and fun.

The medieval index was many things in many formats. It could consist of an alphabetised list of incipits or a conventional set of moral topics; it could also be a more substantial list of moral sentences, becoming a devotional source-booklet of miracles and exhortations. No doubt, they were used to help find material in a book. For example, in Marston 235 (Paris, 1345), the index begins with a preface explaining how the indexer made his index to aid the reader and avoid the “prolixity” of various theological teachers.

Yet indices could also be copied and bound together for independent reading, and could constitute works of literature and scholarship in their own right. Indeed, one index in print gives a fascinating poem which confers a much more expansive power on its index. 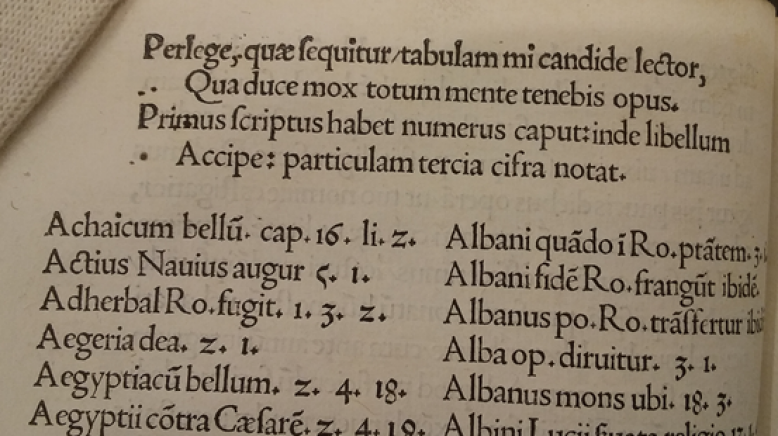 Read the table which follows, my beautiful reader.

With this as leader, you will soon have the whole work in mind.

First the number written has a chapter, then receive the book:

A third number indicates the paragraph.

Indices were not just finding-guides. Not simply a paratext, this index is dux (‘a leader’, ‘guide’ or even a ‘general’) and it received its own poetic preface.

[i] For example, Vatican Urb. Lat. 478 (XV, Italy) consists of indices to Augustine, Lactantius, Petrarch and several indices to Valerius Maximus. Similarly, Copenhagen, Gl.kgl.Saml. 3562, octauo (XV, Italy) contains two indices: one to Lactantius and one to Valerius Maximus. These indices do not simply give topics in their works but actually give substantial moral instruction and historical anecdotes. So for example we read ‘Nobles and elders should not spurn but nurture those younger’ (Nobiles et maiores non debent spernere sed fouere minores) and ‘poverty rears illustrious men’ (paupertas illustres uiros gignit); the index contains gnomic lessons such as ‘We ask for what is often better not to obtain’ (oramus quod sepe impretrasse melius foret), and maxims about genealogy such as, ‘An ugly person is born of a beautiful one and a weak person of a strong one’ (turpis ex pulchro et debilis ex forti nascitur) are repeated a number of times under different letters. Even the indexing of historical persons reflects a moralising concern for the text, ‘The Athenians crowned the head of Pericles in order to incite virtue’ (Periclis caput coronauerunt athenienses ad uirtutem excitandam). The indexer extracts a number of ecclesiastical maxims from the text such as ‘a church should not be occupied by secular groups’ (ecclesia non debet congregationibus secularbus occupari). The pairing of the indices in both these manuscripts offers a compendium of Greco-Roman and late antique lore and wisdom.