Kelsey Champagne is a third-year Ph.D student in the History and Renaissance Studies departments at Yale, focusing on religious history in the early modern British Empire.  Her current research explores early constructions of national identity in relation to religion.

On April 30, 1707, several hundred books arrived at the docks of the British port of Spanish Town, Jamaica.  These books, ranging in tone from didactic to devotional to discursive but all dedicated to the promotion of the Church of England, had just made a twelve-day journey down the Atlantic coast of North America and through the Northwestern Caribbean from Annapolis, Maryland.  Sent with one James Cunningham on behalf of Anglican clergyman, Thomas Bray, they were intended to occupy the shelves of a new Anglican Library on the island of Jamaica.  A single folio with only lists of texts and copy numbers and a small note at the end, this document nevertheless speaks to several disparate scholarly literatures and demonstrates the power of Book History—as methodology, concept and practice—to form a bridge between traditionally isolated conversations as well as between present and past.

Most immediately, this list provides short-hand titles of thirty-seven texts that were circulated within Britain’s Atlantic empire.  Thanks to this, it is possible to reconstruct a public library and consider what colonists were reading or at least what kinds of texts they had access to. However, this document holds as much interest for the historian of the book in a material sense as for the historian of the book in a cultural sense.  The list of titles and number of copies seems to be written in a single hand; the signature is in a second:

Received the forgoing books by me

But it is not only the confirmation of receipt and the gift of a name that is special about this document.  Next to many of the titles listed is a small “x,” which I conjecture was used to mark receipt in the noted number of copies.  For other titles on the list, the number of copies has been crossed out or changed; still others have no markings next to them at all.  This then raises the historian’s favorite question: why?  The simple answer is likely that those titles without an “x” either did not arrive or arrived but with the incorrect number of copies.  If this is correct, then what happened to those unmarked four hundred ninety copies?  Were they left in Maryland?  Did something happen to these books in transit as the ship carrying them traversed dangerous waters rife with pirates and privateers of four other empires?  Does the “x” mean something else entirely?

The markings on this document raise several sets of questions and propel this simple list of religious texts into conversations about maritime travel, smuggling, piracy, library-building, religious devotion, intra-imperial movement and communication, religiosity in the colonies and contemporary notational practices.  Much like literary analysis, the various methodologies offered by Book History allow one to start with the individual unit, with the granular, and expand outward to unlock questions and engage with literatures that would not seem immediately apparent or relevant in a clean transcription of the document itself.  It is exactly the granular that makes each text unique and that ties it to countless elements of a world that we can only hope to reconstruct.

A Catalogue of Books sent to Spanish town in Jamaica by Mr. Cunningham the 18th April 1707 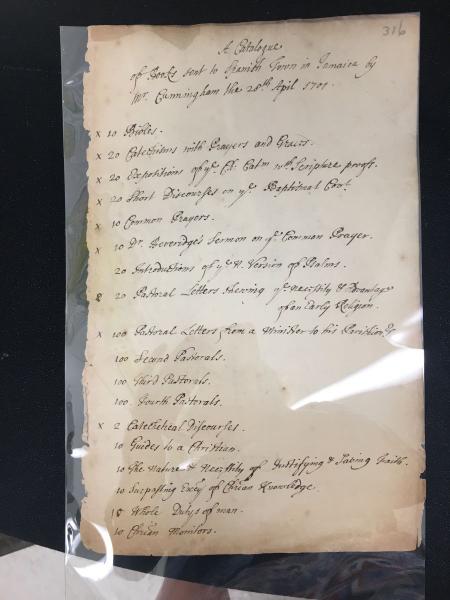 x 20 Catechisms with Prayers and Graces

x 20 Expositions of the Ch. Catm. with Scripture proofs

20 Introductions of the N. Version of Psalms

x 100 Pastoral Letters from a Minister to his Parishioners

10 Guides to a Christian 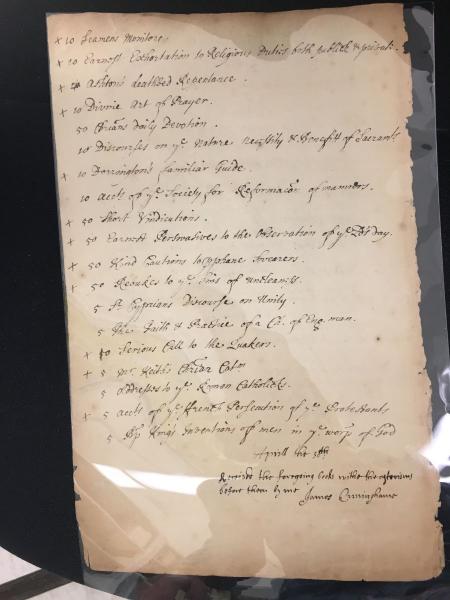 10 Acts of ye Society for Reformation of Manners

x 50 Earnest Perswasives to the Observation of ye Ld’s day.

x 5 Acts of the French Persecutions of ye Protestants

Received the forgoing books by me