Accounting for the Law in the Almanac of John Chesshyre

Andrew S. Brown is a PhD candidate in English at Yale, where his research examines how early modern English playwrights engaged with theories of personation and representation, especially in the context of representative government. Other interests include print history, law and literature, and the history of gender and sexuality.

A contemporary reader glancing through the death notices in the 1738 issue of The Gentleman’s Magazine might have been impressed by the sheer wealth—“above 100 000 l.”—amassed by Sir John Chesshyre (1662-1738), not least due to the closing comment that it was “all acquir’d by the Law” in the position of “King’s Prime Serjeant.”[1] Chesshyre had indeed attained an unusual degree of prosperity at the time of his death. But his annotations in an almanac recently acquired by the Beinecke Library also help to reveal the distinctive ways in which he documented his professional and personal experiences as a young barrister. [2] 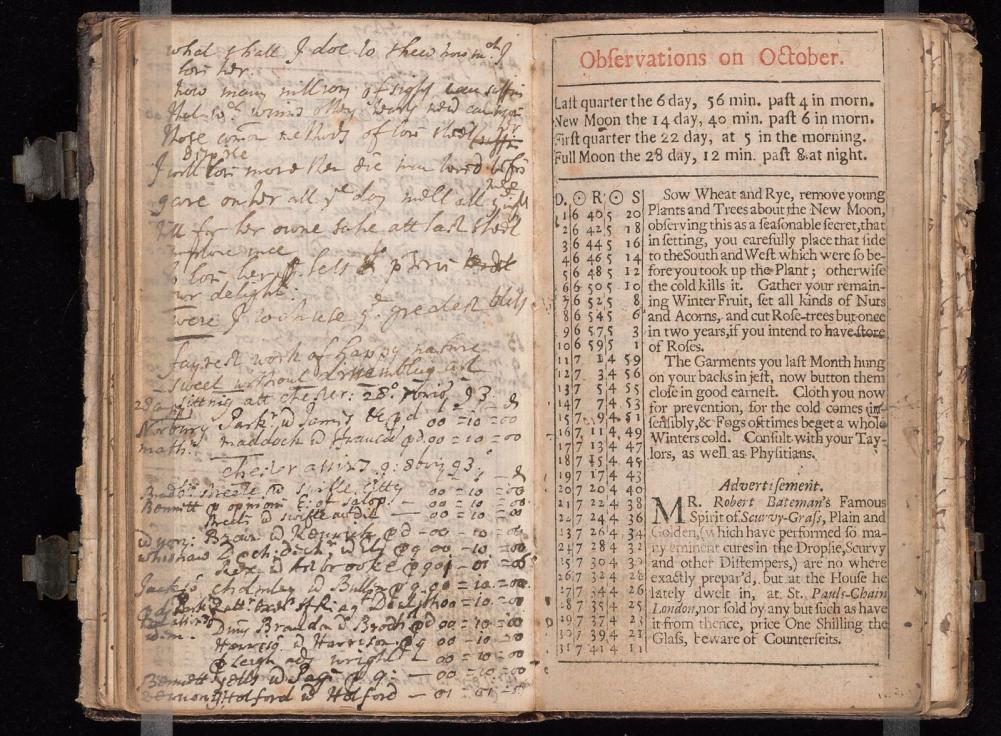 Chesshyre’s notes, which occupy a 1688 copy of the long-running almanac British Merlin, record his earnings and financial costs between 1689 and 1695. With its entries beginning in “the first term after I was called [to the] bar, viz: Hillary” term, the text displays an unusually high number of annotations when compared to other extant almanacs from the same period (which often peter out after a handful of notes). [3] Each blank page is almost completely filled with marks, and many are divided into discrete sections or categories by means of horizontal lines and emphasized subheadings, suggesting Chesshyre’s active (if inconsistent) efforts to organize this information in a manner analogous to the almanac’s native mise en page.

These lists of expenses illustrate how—despite Chesshyre’s later rise to wealth and prominence—the career of a barrister could be both costly and materially demanding. Law students of the late seventeenth century would require the “costs of admission to an inn of court, of residence, of commons in hall [i.e., of dining] for at least two and possibly more than seven years before call, of paper, books, levies and gratuities to servants, fees and presents given on call to the bar, even the bar gown itself.”[4] And indeed, some of the earliest entries in Chesshyre’s diary, gathered under the heading “Since I removed to Gray’s Inn,” delineate precisely such “charges of being called” as “a pair of black stockings” and a bolt of “Barr gown cloth.” Not long after, Chesshyre records a significant payment on “22 Nov.” 1689 for a “long wigg – 03 = 00 = 00,” which he may have worn not only in the courtroom but as part of his everyday attire; as Lynn Festa observes, in this period the wig “serves as a sign of austere masculine authority… it confers a corporate identity upon the individual, marking him as a member of a profession, a person of rank, a public man.” [5]

Peter Stallybrass and Ann Rosalind Jones have suggested that clothes were commonly believed to “have the power to imprint their wearers because they are a form of material memory,” and shrugging on the heavy, dark cloth of his gown each morning would no doubt occasionally have put Chesshyre in mind of his first days at the bar.[6] But the calendrical function of the almanac is also reflected in the way he records when such investments begin to break down. Not simply buying his clothing or other items new, Chesshyre meticulously records costs “for washing cravat,” for re-soling a pair of shoes, and even for having his “laces tagg’d,” illuminating a predictable pattern in which one or more components of his wardrobe is repaired in some way during nearly every legal term. This process is only hastened when he travels beyond London to the assize courts of the Norfolk Circuit in 1692, for which he notes the costs of “2 p[airs] of thread socks – 00 = 01 = 04,” “for liquoring [i.e., lacquering/polishing] boots – 00 = 00 = 06,” and, several weeks later, for “sewing stockings – 00 = 00 = 06” once again.

What can the relentless emphasis on accounting in Chesshyre’s copy of British Merlin tell us about his personal experiences, thoughts, and feelings? If, as a young man, Chesshyre experienced pangs of nostalgia for his parents and siblings after leaving his birthplace of Halton and going down to London, little evidence of such emotion has been left on the pages of the almanac. However, traces of an ongoing relationship with his family members nonetheless survives: several entries, often coinciding with periods of travel, list monetary gifts “to sister Betty” or “to sister Jenny for thread,” and a set of notes clustered on one page record larger amounts “to be Payde [i.e., to Chesshyre] this October,” including “Brother[-in-law] Johns money – 200 l.”

Similarly, in a passing detail like his note of the cost “for Essence of Jesmine – 00 = 00 = 06” (probably used as a kind of cologne or nosegay), the London lawyer can be linked to an international network of trade in spices and cosmetics, as well as to the rich olfactory dimensions of the period’s material culture. And a final glimpse of Chesshyre’s experiences can be found in one of the only loosely “literary” entries in the almanac, a few lines from a popular ballad that he copies on the blank page opposite “October” (pictured at top).[7]

Whether we imagine him copying these lines from a contemporary broadsheet or scribbling them down in the midst of an impromptu performance, the boundless possibility suggested by the opening phrase “What shall I doe” provides an apt figure for how Chesshyre’s almanac allowed him to reflect on the costs and the benefits of all that legal London and its environs had to offer.

[1] The Gentleman’s Magazine and Historical Chronicle, Volume VIII (London: Edward Cave, 1738), 277. Chesshyre is here said to have died suddenly, while stepping into his coach (itself a marker of his relative status). See too David Lemmings, “Chesshyre, Sir John (1662–1738),” Oxford Dictionary of National Biography, Oxford University Press, 2004.

[2] Chesshyre’s diary is located at Yale University, Beinecke OSB MSS 184, Box 23 (Taussig Catalog #175). The Taussig Catalog, acquired jointly by the Beinecke and Lillian Goldman Law Libraries in 2014, was compiled by Anthony Taussig (himself a London barrister) and consists of materials ranging from roughly the thirteenth to the twentieth centuries that are of interest to legal and social historians. All transcriptions from the document’s original handwriting are my own.